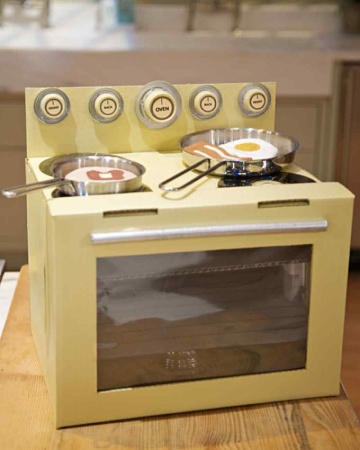 The oven we made on the show
I met Martha in 2008 at a book signing my husband Clifford had encouraged me to attend. When it was my turn, I got up the courage to say, “I’m not a cook I’m a crafter and I’d like to be on your show.

I thanked her, went home and later logged into Martha Stewart.com. What appeared on the screen literally spoke to me!

Do you have a clever craft idea?
Just so happen Martha was looking for ideas and I had the perfect one for her.

I sent in pictures of a play oven I created from a box that had a window for displaying coloring pages of foods. The foods were drawn such that they appeared to bake in the oven. Her producers liked it so much I was invited on the show (February 2009).

That box landed me on National television. It’s amazing a little creativity and imagination can take
you.

Beyond The Oven has absolutely nothing to do with cooking.  In fact I really do not like to cook. I did however enjoy baking with my Easy Bake Oven and playing with pretend appliances as a child.  But that was the extent of my fondness.

Beyond The Oven is my means to inspire creativity. I can remember experiencing pure joy making mud pies on rainy days and coloring pictures of foods.  My mom, a Creative as well, kept me actively engaged in all sorts of creative endeavors and I am forever grateful.

Those early childhood exposures and experiences matured into a passion as an adult. Beyond the Oven is the venue for using my creativity, imagination and energy to make a difference in the lives of others. ~Cheryl

Join 12 other subscribers
Follow Beyond the Oven on WordPress.com